A MEETING PLACE FOR FAMILY AND FRIENDS

Planted almost entirely to Chardonnay, with small amounts of Pinot Noir, Coolshanagh Vineyard sits seven kilometers north of Naramata, British Columbia between what was the ancient west coast of North America and Okanagan Mountain. Distinct regional flavours emerge from this fertile calcium carbonate-loaded soil made up of fractured glacial bedrock.

Coolshanagh Vineyard grapes were originally sold to other wineries, but in 2012 owners Skip and Judy Stothert launched their own wine made exclusively from grapes grown on their unique property. Crafted by the skilled Matt Dumayne, winemaker at Okanagan Crush Pad in Summerland, the Coolshanagh Chardonnay beautifully expresses its north-Naramata terroir.

Inspired by the Grand Cru wines of Burgundy (wines with subtle oak influence which allow the individuality of their terroir to shine through) the Coolshanagh Chardonnay is a fruit-driven wine with stunning minerality that expresses Naramata. The use of large oak barriques, concrete vats and lees aging all contribute to the subtlety and expressiveness of this singular wine.

The team believes that the very best Chardonnay is merely a vehicle for the character of the vineyard in which it is grown.

According to Judy Stothert, herself an accomplished Interior Designer, the idea was to create a label that looked like a work in progress, just like the vineyard itself. Coolshanagh translates as “a meeting place of family and friends”, so the look and feel had to be welcoming and authentic, as well as elegant. Coolshanagh was the name Judy’s family called their houses; therefore, the Coolshanagh logo had to have a custom handwritten feel to it, as if it were offered from a member of the family.

The embossed line graphic on the label could be seen as either a bunch of grapes upon a long vine, or something more reminiscent of the vineyard topography. The wavy line suggests the contours of the land, while what was seen as grapes could be representative of the stony soil that is so unique to Coolshanagh. 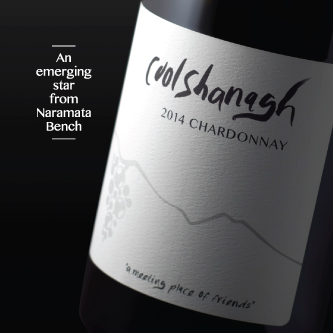