A meeting place for family and friends

“Coolshanagh” is a Gaelic word that means a “meeting place of friends.”

Coolshanagh was the name Judy Stothert’s family, which has roots in Scotland and Ireland, used to identify their homes. This went on for multiple generations in celebration of the friendship between family and friends. Winery owners Judy and Skip Stothert love celebrating family traditions, so when they started their vineyard in the Okanagan, they named it “Coolshanagh”.

The first hectare of Chardonnay was planted in 2004. Planted almost entirely to Chardonnay, with small amounts of Pinot Noir, Coolshanagh Vineyard sits seven kilometers north of Naramata, British Columbia between what was the ancient west coast of North America and Okanagan Mountain. Distinct regional flavours emerge from this fertile calcium carbonate-loaded soil, made up of fractured glacial bedrock.

Coolshanagh Vineyard grapes were originally sold to other wineries, but in 2012 owners Skip and Judy Stothert launched their own wine made exclusively from grapes grown on their unique property. Made at Okanagan Crush Pad in Summerland by the skilled winemaker Matt Dumayne, the Coolshanagh Chardonnay beautifully expresses its north-Naramata terroir.

Coolshanagh produces a small batch Chardonnay (~750 cases), sourced only from estate fruit, and 75 cases of estate grown Pinot Noir. Wines that echo Burgundy were the initial inspiration, however, the ultimate Coolshanagh wine style that emerges specifically expresses and reflects the terroir of the Okanagan Valley and of the diverse soil of Coolshanagh Vineyard.

The Coolshanagh Chardonnay is a fruit-driven wine with stunning minerality that expresses Naramata. The use of large oak barriques, concrete vats and lees aging all contribute to the subtlety and expressiveness of this singular wine. 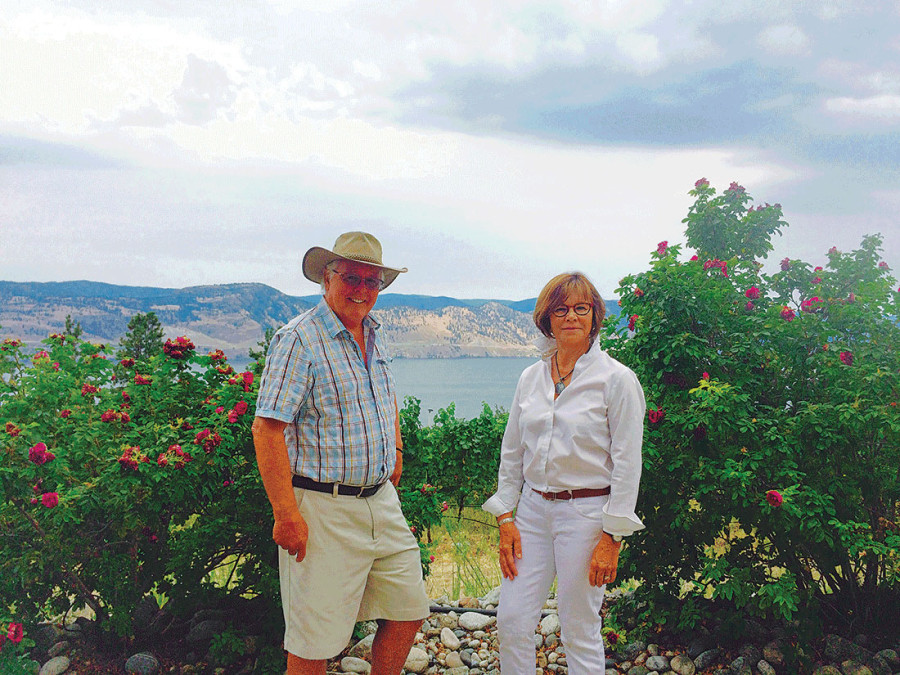 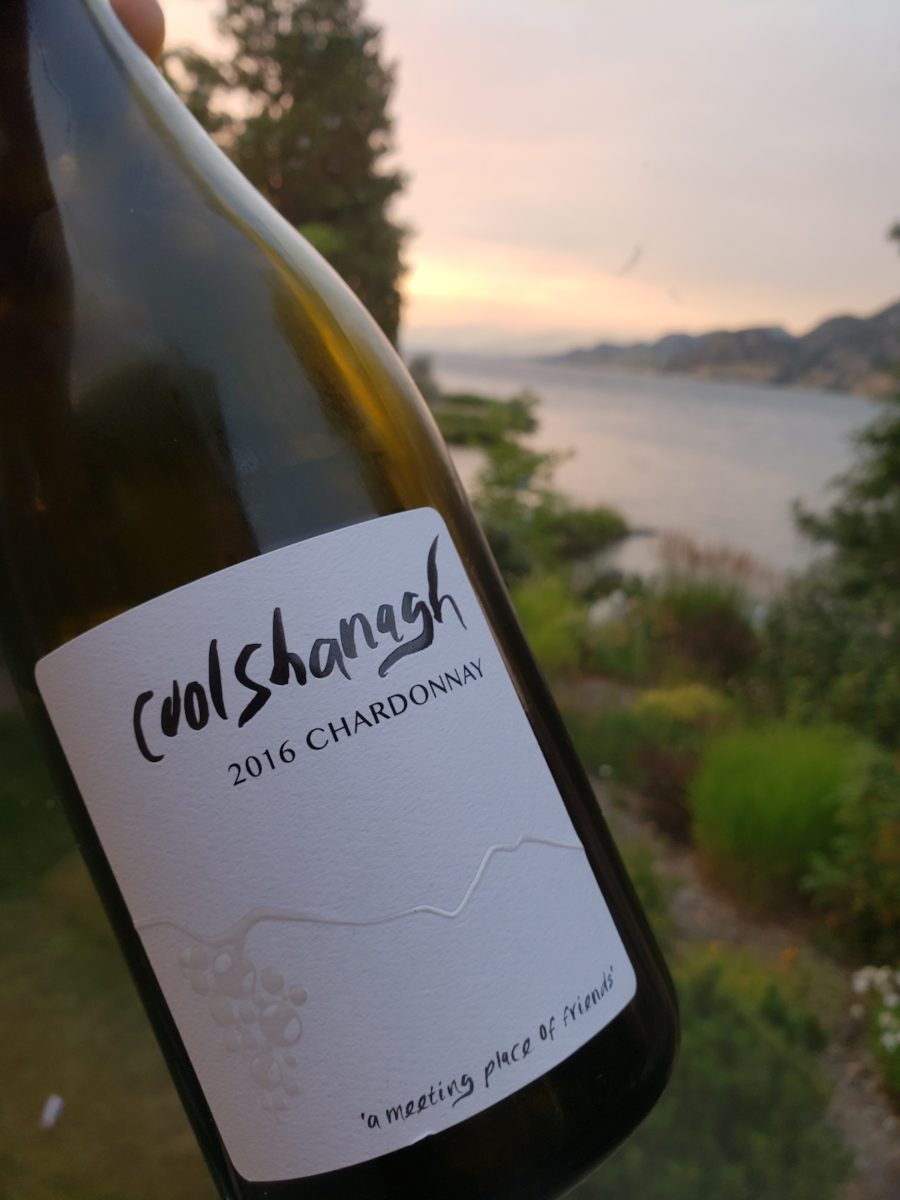 Judy Stothert, herself an accomplished interior designer, was inspired to have a label that “looks like a work in progress, just like the vineyard itself”, but given how special the wine is, the look and feel had to be elegant, as well as welcoming and authentic. Packaging was created by Town Hall Brands.

The resulting wordmark is custom, with a handwritten feel to it, as if it were a gift offered from a family member.

The label sports an embossed line graphic. The wavy line suggests the contours of the land, while the ‘grapes’ could be representative of the stony soil that is so unique to Coolshanagh. 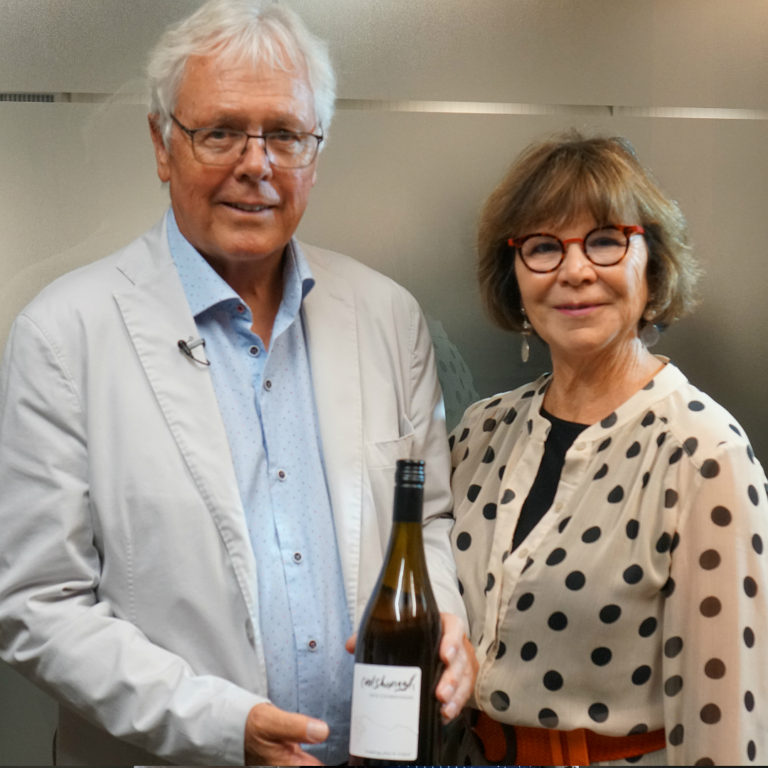 Skip Stothert ran a successful highway paving business (Green Roads Recycling) and Judy Stothert was a successful interior designer but in 2003 the couple relocated from North Vancouver to a 52-acresite seven kilometers north of Naramata, directly above the water.

Skip was first exposed to wine via his father. Winston Stothert belonged to the Opimium Society beginning in about 1960 and thus a love for the great wines of Burgundy began to emerge in Skip – including the Chardonnays of Pouilly-Fuisse, Chablis, Montrachet and Meursault along with the Pinot Noirs of Beaune and Gevrey-Chambertin.

After noting that many vineyards in the Okanagan were small plots planted to four or more varietals, Skip made the decision to focus on one, maybe two varieties at the most, and to grow them as best as he could. The research that followed showed that Chardonnay and Pinot Noir were best-suited to his vineyard on the northern Naramata Bench, which were planted in 2004, 2009 and 2011.

The fruit from the vineyard was sold to other wineries (including good neighbour Foxtrot) for several years, gaining great acclaim along the way, before Skip & Judy became clients of Okanagan Crush Pad, to make wine under their own Coolshanagh label. 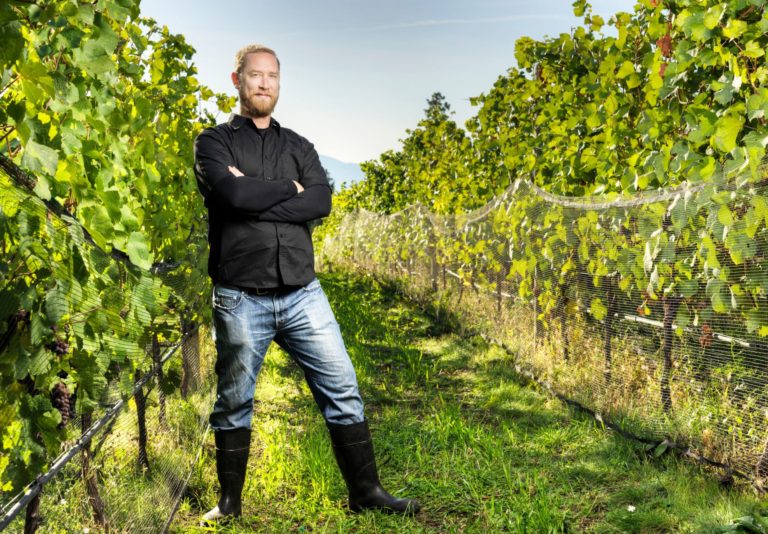 As the Okanagan Crush Pad chief winemaker, Matt Dumayne’s objective for Coolshanagh is to make wines that specifically express and reflect the terroir of the valley and of the soil of Coolshanagh Vineyard.

Originally from New Zealand, Matt Dumayne’s past experience included making wines under his own label, De Vine Wines, which captured critical acclaim, including 96 points and five star reviews from MW Bob Campbell. Additionally while in New Zealand Matt made custom crush wines for others, and gained experience converting a vineyard to organic and biodynamic farming practices.

He went on to craft award-winning wines in Central Otago, California, Australia, and Oregon for more than 25 vintages, before bringing his experience and passion to Canada.

Consulting to Coolshanagh is the internationally renowned terroir specialist Dr. Pedro Parra. Based in Chile, Pedro is one of only a small cohort of wine terroir consultants in the world. Unmatched in the wine world, Pedro was named as Decanter Magazine’s Power List of 50 Most Influential Wine People and Jancis Robinson, one of the world’s most renowned wine critics calls Pedro Parra-“Chile’s Terroir Genius“.

Pedro evaluates the soil and through precision viticulture techniques makes advisements on what to plant in what site, and the irrigation regime. When Pedro visited the Coolshanagh site he was most impressed.

Pedro studied the site in August 2014, and stated he felt that it offers some of the best exposure and soil structures for grape growing he had seen in the Okanagan. Poetically, he suggested the land had the “soul and texture to potentially develop tastes similar to that of Meursault, but with an undeniable Okanagan backbone. It is in the top 15% in the world.” Skip and Judy are proud to have Pedro’s global insight to apply to their Naramata site.